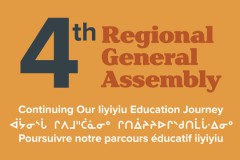 The Cree School Board began its Community Tour for the 4th Regional General Assembly in October 2022, visiting majority of your schools and communities around Eeyou Istchee to discuss the theme “Continuing Our Iiyiyiu Education Journey.”

The biennial Regional General Assembly will travel to the remaining communities that we were unable to visit in October. The following dates have been rescheduled for Whapmagoostui, Oujé-Bougoumou, and Waswanipi: 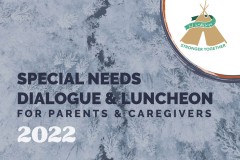 During the RGA Community Tour, come to your community’s special needs dialogue and luncheon from 11 a.m. to 1 p.m. This will provide an opportunity for parents and caregivers of special needs children and adults to share their insights and concerns.

We want to hear from you!

The 4th Regional General Assembly is going on a Community Tour

The Cree School Board is looking forward to visiting your schools and communities for the 4th Regional General Assembly – Community Tour around Eeyou Istchee for two weeks to discuss the theme “Continuing Our Iiyiyiu Education Journey.”

The biennial Regional General Assembly will begin the journey in the coastal communities from Tuesday, October 4 to Friday, October 7, 2022. Then the tour will continue from Monday, October 17 to Thursday, October 20, 2022 in the inland communities!

What does a commissioner do?

To provide a culturally relevant education that is the unique foundation upon which youth can attain any goal.

To provide sound curriculum, emotional and social support, and a rich traditional environment which fosters pride and a love for learning in all students.

All students have the right to…

Wemindji is a Cree community about 1,400 people at the mouth of the Maquatua River on the eastern shore of James Bay. The community is nestled on an inlet among the picturesque Painted Hills Islands. The name Wemindji comes from the Cree for "ochre hills" or wiimin uchii. The people of Wemindji relocated to the current site of the community in 1959 from their original home on Old Factory Island.

History of Education in Wemindji

Maquatua School first opened its doors to students in 1973 under the name Wemindji Day School.  In the late 1980’s a large addition was added to the original building.  A local contest was held to rename the building.  MaquatuaEeyou School was the winning entry and references the location of the school on the Maquatua River.

In 2016 Wemindi celebrated the opening of an elementary school to serve the student population from Pre-K to Grade 6 and so MaquatuaEeyou School now serves only secondary students.

Joy Ottereyes Rainbow Memorial School opened in August 2016, with an official inauguration in April of the following year.

The school was named after a Grade 6 student, Joy Ottereyes, who passed away suddenly in 2010 as the result of an allergic reaction. Joy would have graduated the year the school named for her opened. The "Rainbow" was added to the school's name because Joy loved rainbows and would often sign her name with a rainbow at the end of it.