The community and school marked the opening of a new cultural learning facility at Willie J. Happyjack Memorial School in Waswanipi on September 24, 2019.

"Bring the bush to the school for the Cree Culture"  is Phase 2 of the action plan for Waswanipi Schools. In 2017, they built two Cree culture buildings at Joy Ottereyes Rainbow Memorial (elementary) School.

We want our school to be a welcoming place of learning.

"Many of our students don't have a real chance to go to the bush for multiples reasons. Now, we give them that chance to learn authentically and maintain their Cree culture, values and traditions. As school administrators, want all the Cree culture classes to take place in these buildings," said Robert Laperle, vice-principal of Rainbow Elementary School and collaborator on the project.

The new facility features three buildings - a cookhouse, a cabin, and a sabtuan -  so that students of all levels (pre-school, elementary, high school) will be interested, he added.

While the project was a major collaboration, it originated when a Cree culture teacher, Flora Otter, approached administration several years ago to say how difficult it was to teach Cree culture in a classroom, rather than the bush.

Funding was made available through the Deputy Director General of Operations and New Paths for Education, and construction began in August of 2019. The building was created mostly during the evenings by steadfast volunteers. 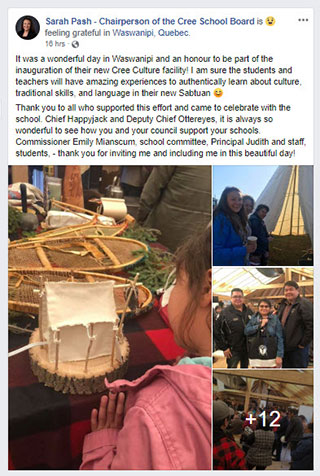 Pash praised the support the community has given to Waswanipi's schools on these cultural projects.

"I am sure the students and teachers will have amazing experiences to authentically learn about culture, traditional skills, and language in their new sabtuan," she said in a post on social media following the inauguration.

We want our school to be a welcoming place of learning.