Each school unveiled their logos in their communities, with students, parents, and community members in attendance.

On May 27, 2021, the Wabannutao Eeyou School in Eastmain gathered in their school gym to present their new logo. Chief Kenneth Cheezo developed their previous logo, which was used from 1983 until the new logo was introduced.

"It was interesting to see how our logo evolved; the colours in the new logo reflected our elementary and high school," said Sarah Mark-Stewart, who was an Interim Community Education Administrator for Wabannutao Eeyou School at the time of the interview, but now works as a Vice-Principal for her school, "and I knew our logo would change one day and it's a good change. We are showing that we need to continue to update our school branding."

The school plans to honour the previous logo by displaying it on a school wall so that everyone who passes by the logos can see how the school brand has developed over time. 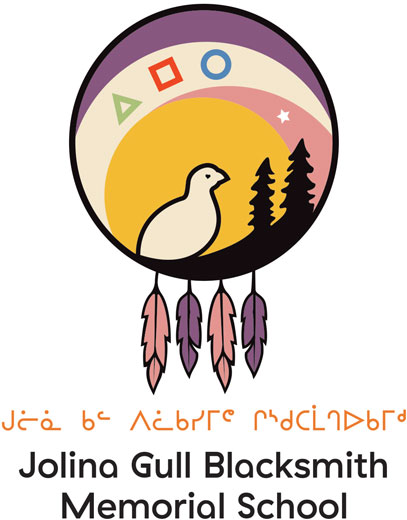 "When I first saw the logo, I was surprised to see it since Jolina liked eating ptarmigan, and sometimes she would not eat because she was excited to get on the school bus," said Marlene Gull, who is also an Office Agent for the Waswanipi schools, "I was overjoyed to see her being honoured by the school. Pink and purple were her favourite colours, and it was very nice to see them on the logo. My family loved it."

The logo also incorporated components from the elementary and secondary schools to show how their teachings in preschool can be later applied to the children’s future academic years.